Some of my favourite bits and pieces from the Integrated Media Association conference in Seattle last week, in no particular order:

Being on a panel with Robert Lyons, Director of Radio and New Media Initiatives at WGBH Boston. They have some awesome stuff on line.

Finding out that NPRs podcast project has had 16 million downloads since it started 6 months ago.

John Hagel, the business analyst NPR is working with, stressing that everyone, not just broadcasters, has to shift from a product mindset to an audience/consumer mindset. That the real issue isnt how much to create and how many people see/use it but instead, how much it costs to find and retain audience/consumers’. He calls it return on attention and even has a nice graph to go with it.

Terry Heaton, quoting Gordon Borrell, in reference to user generated content and what it means for broadcasters the deer now have guns. Time to get into the ammo business.

Adam Berreys demo of Brightcove. Putting video on line was never so easy. This totally rocks.

Hanging with Tony Walker of ABC’s DiG in Melbourne. Not only is he one of the nicest guys in the world, he seems to always find the best food in the world. Thanks for the sushi.

Listening to Mark Fuerst, Executive Director of IMA, with my eyes closed. He doesn’t look anything like him, but he sounds just like Dick Cavett.

BBC plans to put more content online on Monday (Feb 27) as part of their Creative Archive Project. Speaking in Seattle today at the Integrated Media Association conference, BBCs Creative Archive project director Paul Gerhardt walked through plans for more content and even a simple on-line video editor so users can remix the content as they see fit.

Asked how BBC producers feel about having their content mashed up, Gerhard replied We try not to use that word … we prefer to call it personalization, which got a big laugh from the room of mostly public broadcasters.

This project has required some interesting rights negotiations, and BBC is using its a purpose built rights agreement based in large part on the Creative Commons license.

It is an 18 month pilot project, exploring ways of getting BBC archive content online. It is billed a public service for the UK public, and is currently only available to people in the UK, or who can spoof a UK location. I asked Gerhardt if the intent is to open this up to the rest of the world, he said that once the trail period is over, and if BBC decides to move forward with it, the intention is to partner to bring the archive to the rest of the world.

For more on the license and the project, go here.

Chris Pirillo caught some knitting action during our presentation at Northern Voice.

I don’t know about Mark or Michael, but I take ‘knitting while panelling’ as the highest of compliments.

Arrived in Seattle on the AC shuttle from Vancouver. Sitting behind me were two people from Wisconsin, on their way to a conference else where in the US.

They have a 5 hour layover in Seattle, and since they’d never been here before, decided to make a dash to the cab stand and see as many things as they can in the time they have.

With 30 minutes travel time downtown from SeaTac, and give them a slim 30 minute check-in, that leaves them about 3.5 hours.

Got me thinking. What would I do if I only had 3.5 hours in my city, Vancouver.

More on this later…

An open letter to Ricky Gervais.

Ricky. I know you’re about to visit Canada for the first time. I heard you say so on CBC Radio’s Saturday Afternoon show.

Despite what the host of the show said, Vancouver is a wonderful place. You’ll love it. And it will love you.

Speaking of that show, it’s too bad that after all these years they still haven’t figured out their guests are far more interesting than they are. On behalf of all Canadians, we apologize.

You, on the other hand, were brilliant, as always.

PS: My wife was born in London Ontario – maybe you’re related ? She says since you’re going to be in Vancouver, you should come for dinner.

Spring in Vancouver. There’s nothing quite like coming across these guys in February. 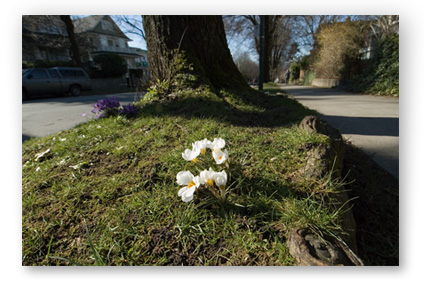 These were just outside Green Thumb Theatre on Victoria and Venables in Vancouver.

At the recent Northern Voice conference in Vancouver, a number of us commented on how much ‘media’ gathering was going on – by the participants. Along with the ubiquitous clickety-clack of fingers on laptop keys, there were cameras and audio recording going on at every turn.

For a measure of how much media we’re talking about, just check this out. As of this morning, there are 2587 photos at Flickr tagged Northern Voice.

Let’s assume that number includes all the pictures taken at last year’s event. Let’s also assume that no-one ever sleeps while at Northern Voice (a fair assumption from what I could tell).

Hey – Monique. Thanks for the photo from Northern Voice.

That’s a transistor on the screen. For the whole story on THAT you’ll need to come and hear me speak.

Do I look fat in this presentation? Damn those wide angle lenses.

It was really great being on a panel today with Mark Schneider and Michael Tippett at Northern Voice 2006.

It was flattering to see the room full at UBC Robson Square, considering the panel in the other room was Music 2.0: Where It Came From and Where It’s Going with Colin Brumelle. It’s usually pretty hard to compete with those music panels!

In any event, we had great questions from the crowd that was there, and probably could have talked for hours.

Thanks to everyone who showed up, and thanks to the Northern Voice gang for putting on such a great event. 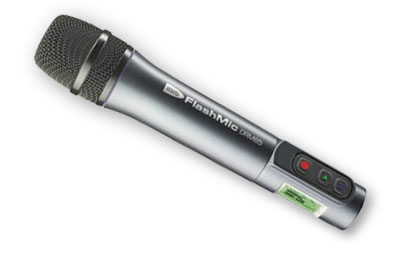 From the HHB web site:

The worlds first professional digital recording microphone. Combining a high-quality, Sennheiser omni-directional condenser capsule with an inbuilt, broadcast-quality Flash recorder, FlashMic is a convenient, easy to operate and durable recorder thats perfect for press and broadcast journalism, or any other voice recording application.

With no messy cables, just one button press is all it takes to start recording in either linear or MPEG 2 formats. Simple drag and drop file transfer at up to 90x real time to a Mac or PC for editing or onward transmission is enabled by a plug and play USB connection. Two AA batteries provide more than 6 hours continuous power and, with a 0 – 10 seconds pre-record buffer and 1GB of flash memory, you can be sure that youll never miss a word of that important interview with a FlashMic.

I’m not sure I’d like to spend a lot of time hand holding this 13 ounce baby, I’d prefer removable memory, and who knows what happens if you drop it – but this looks like a fabulous idea for certain situations.

The real issue is the price. $ 1400.00 Canadian (that’s the discounted price at Oakwood Broadcast in Winnipeg) is a pretty steep price to pay for the convenience.

For the same price, you can pick up a great digital recorder with a lot more features, a decent mic, even some pesky cables, and still have money in the bank.

Check out this close up of the function keys and display 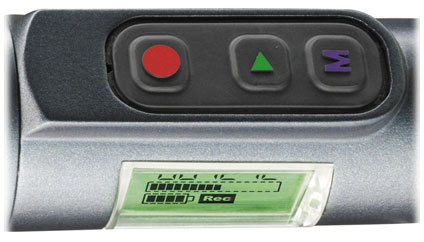 I’m about to upgrade to v2 of WordPress.

Past experience being what it is, this should go smoothly and all will be well.

If blog.bigsnit.com disappears for a bit, please be patient. I will return.

We’re thrilled to be part of the new British Columbia Sport Event Hosting and Resort Guide.

It was launched today in Torino, Italy. We’ve been working with a fantastic team at 2010 Legacies Now, Tourism BC and the Ministry of Tourism, Sport and the Arts to create the site, the first of its kind. 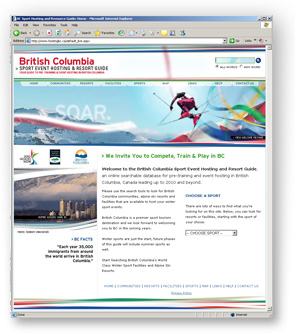 The site is at www.hostingBC.ca

And here’s the press release about it.

Ipods (and other media devices) and on-demand content are big themes at conferences everywhere this year, including those for public broadcasters.

This is an international conference featuring some of the worlds top public broadcasters, as well as representatives from software and hardware companies that work in this space.

Looks like I’ll be involved in a number of presentations and panels on the 22nd and 23rd.

I’m presenting on new models for broadcast and how they challenge existing media for audience loyalty, where I get to team up with my pal Tony Walker of DiG radio at ABC Melbourne.

Looks like I’ll also be on a panel called The Web 2.0 and Public Media which also features speakers from PBS powerhouse WGBH in Boston, the Research Channel, and university station WILL in Champaign-Urbana.

More on this conference here.

CHUM Ltd and Citytv today launched their new “Diversity Online” project. We’re thrilled to have been involved with it, and were super impressed with everyone at CHUM and Citytv. Big thanks to Prem Gill for making this happen.

The site is at diversity.chumtv.com 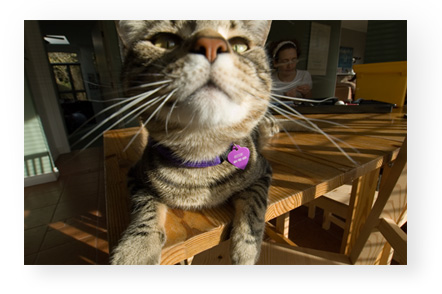 It focuses down to 1 foot – Ozzie’s pushing well inside that, but then again, he’s a cat.

Here’s a shot from outside the side door of our house. 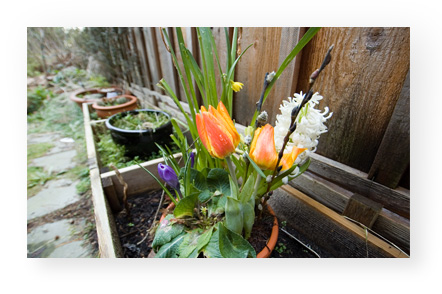 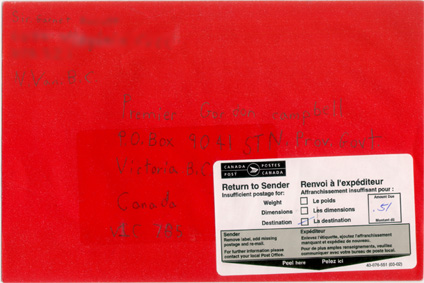