UPDATE:  Captain Phab Marine Alcohol is no longer available.  In an email from the company in Aug 2021:  “

“Unfortunately we do not produce marine alcohol anymore, it was discontinued due to a Health Canada recall in Oct 2019. This recall was all stove alcohol across the country, not just Captain Phab.

We do however have a Lloyds Ethanol, which is essentially the same. Burns clean, and is used in boat stoves.

This comes in a 1L and we have stock.”

Original article below – and there’s a lot of great info in the comments.

Who knew that finding alcohol could be this hard !

My little sailboat Madsu has a non-pressurized alcohol stove made by Origo.

The stove is responsible for making coffee, hot water for shaving, and all my cooking that isn’t BBQ;  in short, one of the most important items on the boat !

Up until this year, I’ve been able to buy denatured alcohol for the stove at one of my local hardware stores – Rona used to stock it with solvents and turpentine – and it was relatively cheap.  It was simply called Denatured Alcohol – a no brainer.

This year, I haven’t been able to find it anywhere.

So, I did a quick crash course on alcohol for stoves.

A search on the web shows that other people in Canada have trouble finding denatured alcohol.  Other than for use in stove, apparently bike folks use it to clean gears etc.

Denatured alcohol is Ethanol – grain alcohol that’s been treated to make it undrinkable.  It burns super hot and while not great for the environment, burning it is slightly LESS bad that burning other types of fuel.   Most places I went to looking for this fuel, including my local marine store (Martin Marine in North Vancouver) sell Methyl Hydrate, which will also work in the stove.   Methyl Hydrate is wood alcohol – if you’re old enough you probably remember using it in Bunson Burners in high school chemistry.

In any event, I was bent on finding denatured alcohol rather that burn methyl hydrate.

I thought I had found what I was looking for over at West Marine. They sell something called blue flame stove fuel, and though there was very little information on the bottle, I assume this is some type of ethanol mix.  I almost had heart failure when I picked up the small bottle (less than a litre) and saw the price tag:  $30.00. Burning EverClear would be cheaper.   Meanwhile, in the US, West Marine sells a gallon of  “soot-free alcohol” for 29.00 !

I’d almost given up, when I stopped by Steveston Marine just off Granville Island. They now stock something called Captain PHAB Marine Alcohol, from a Peterborough Ontario company, Captain PHAB. 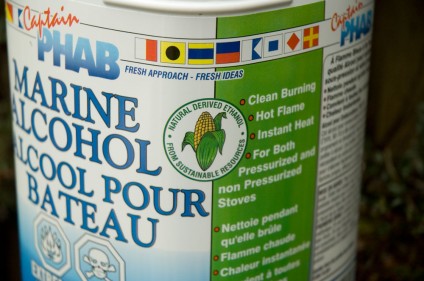 It sells for $19.99 for a 4 litre bottle (that’s 1.14 gallons) and it’s a 90-10 mix (Ethanol and whatever they use to make it undrinkable).  The staffer told me that one of the reasons denatured alcohol has been hard to find is that one of the main suppliers either went out of business or stopped carrying it.

So, for all you sailers, campers and bikers – try Steveston Marine in the lower mainland, or check your local marine store and if they don’t have it, get them to order it for you from Captain PHAB.

As for me, I’m heading down to the boat right now to fill up my stove and perk up a pot of coffee.

I’m so damned pleased with myself, I might even shave. 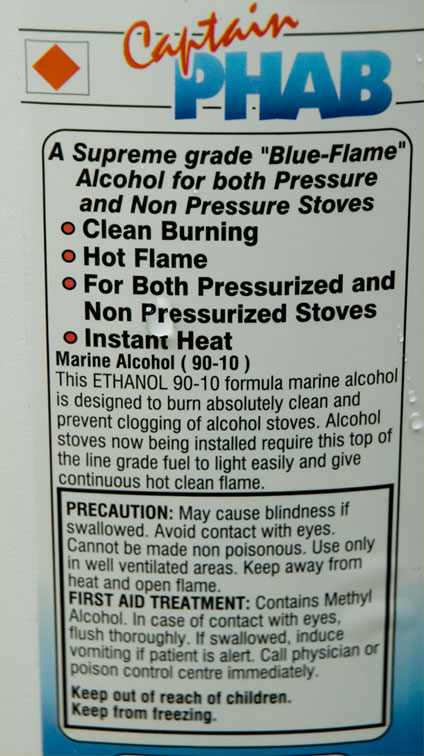