Another reason why I passed on getting an iPhone. http://bit.ly/uBuni

It all looks a lot like the CBC website, aside from having a bigger, flashier main page banner.

But ‘below the fold’, it’s pretty much the same grid.

6 litre jars of kosher dill pickles in the water bath. 30 days from now those cucumbers will be transformed into crunchy heaven with a bite

Another big bowl full of cucumbers picked before the rain started . That means its DILL PICKLE night at our house. Water’s on the boil….

Went to see a movie at Esplanade 6 in N. Van. Film ends, I look over, woman next to me has a dog in her lap. Do dogs pay?

The nice people at REnewal in the Tides Renewal Centre found my Otter Bottle (stainless steel water bottle) that I left there yest. Thnx!

Fresh organic Rhubarb Pie – and Yoga. Not together – but firsts none the less. More on SunsetGardens.ca http://bit.ly/rQADB

Finally got a new cell phone after dropping my 6 year old Siemens phone overboard in HorseShoe Bay. Guess the otters will be on SMS tonite 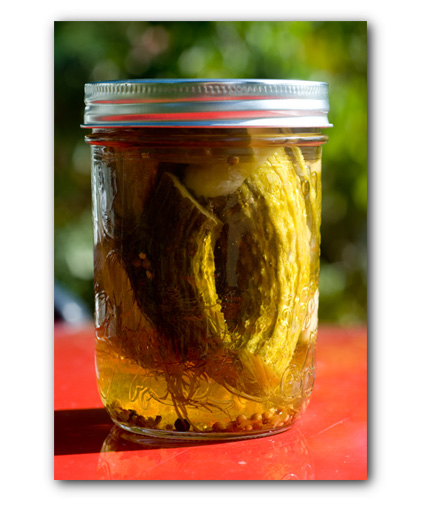 The Lower Mainland called in the big guns today – Sunshine.

After yesterday’s winter-like-but-not-yet-winter-rain-here-to-remind-you-what’s-coming rain, it was sensational to soak up the sun today.

I had wonderful session with my RMT at Complement in the West Van Rec centre. I’ve been seeing her for a couple of years now, and today was one of those magic sessions where I left feeling like a different person. Nice.

My newly-married-sister-in-law and her new husband are returning from leg 2 of their honeymoon in Quebec City, so thoughts of heading out on the boat to chase the sunshine for a couple of hours, had to be put on hold. They’re here overnight then head back to Portland Oregon, having now spent more of their married time in Canada than in their home country, the grand old USA. Ha!

With a small early afternoon window, I decided to do up some dill pickles. I’ve got a seemingly endless supply of fresh organic cucumbers in my garden. I love an old fashioned garlic dill pickle, and found what looks like a promising recipe/post called Dillicious! Homemade Dill Pickle Recipe the Mennonite Way.

The thing is, I’m trying this recipe with a bunch of lemon cucumbers, and a couple of Suyo Long variety – not exactly dill material, but what the heck.

I love the smell in the house – that’s awesome combination of vinegar and pickling spices that reminds me of when I was a kid, watching my aunt Simone in the kitchen. I spent most of my summers hanging out at her house with my cousins. She somehow always managed to do wonders in the kitchen while holding a cigarette in one hand and a Black Label beer in the other.

There always seemed to be an endless supply of chips and pop, which we’d get after helping her in the garden. We’d pull fresh corn and peas for dinner, then shell what seemed like bushels of peas (for freezing) while sitting in the living room watching daytime TV. I can’t eat fresh peas from the garden without being reminded of The Price is Right, The Dating Game and the Newlywed Game.

Hmm. That gives me an idea. Maybe tonight over dinner with my sister-in-law, I’ll have to give them a Newlywed Game quiz.

I know, when we open up one of these pretty little jars of dills later this winter, that the memory of my aunt Simone will be right there as well.

New Blog Post: Newlyweds and Dill Pickles (or) How I Spent Thursday in the Sunshine http://bit.ly/GnGkN

RT @ecoshed: The smart greens at Granville Online call us “an urban escape and a model of sustainable design” http://is.gd/3oaWj

Launch of launch of LoCo BC, business network to create a diverse, vibrant local economy. YOU SHOULD COME ! info -> http://bit.ly/1eBCTT