The email in-box is a great guide to the state of the world.

A quick glance through the subject lines of the morning mail is proving to be an accurate gauge to the psyche of the nation, or at least accurate enough to rival the augurs of the ancient Romans.

On one hand, the Christmas gift idea flood has begun, with new ideas on how to spend money arriving almost hourly.

These cheery greetings come from companies I’ve bought from in the past, and dozens I haven’t.

Barging its way into my plastic subsidized world

From one of my local news stations:

And from Canaccord Capital, a reminder that:

It seems there are lots of stores that are closing due to the “recession” and the fact that people are not shopping. If you have any “gift cards” from these stores, make sure you use them, or you will lose them

The above, followed by a depressing list of major retailers going broke or closing outlets.

CTV Inc. will lay off some employees, freeze hiring and cut spending to cope with “sharp decreases” in advertising as the television industry braces for a deep slump.

And this from Ipsos (the polling folks)

Dudes, don’t you realize all this reality is bumming us out ?

I mean, I can only take so much reality – what about you ?

In the word’s of Detective John Kimble in Kindergarden Cop:  SCHTOP IT!

Thankfully, at least in my in-box, reality is losing out to Happy Thoughts.

To which I say: “Keep ’em coming boys, and hey mailbox – pass the bottle would ya?”

A new Ipsos Reid poll reveals that six-in-ten (61%) pet owners in British Columbia plan to buy (or have already bought) a present for one or more of their pets this holiday season. This includes 68% of dog owners, 61% of cat owners and 54% of other pet owners (e.g. fish, birds, rabbits, hamsters). Women pet owners (65%) are more likely than men (53%) to say they plan to buy a gift for their pet. Full story here

The Ipsos story has more facts about the kinds of things pet owners buy. My favourite is “13% of pet owners plan to make their pet a special holiday dinner.”

Now I’ll admit that our family is a little abnormal, we don’t go crazy with presents at Christmas, so Ozzie the Cat, cute as he is, is getting nada from St. Nick.

This is a bit of a drag.

Being a west coast cat, he’d really like a new Prius to sit on. 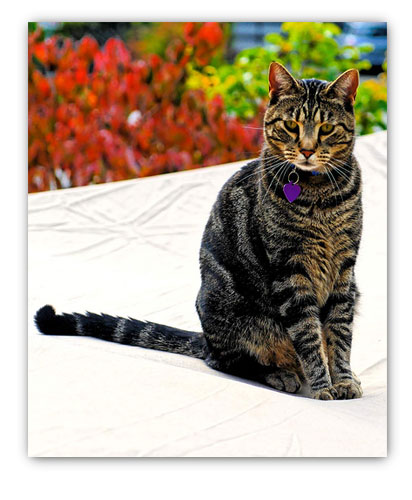 At least according to the latest research from Ipsos.

nearly four-in-ten Internet-enabled adults in Canada (37%) have visited an online social network or online social community and three-in-ten (29%) have placed a profile on at least one such site.

But it gets worse. I’m not even a ‘cool old guy’. There are cool old guys and gals everywhere…

OMG. This is the equivalent to wearing penny loafers in the 70’s, isn’t it ?

Read more, and weep, on the Ispsos site.