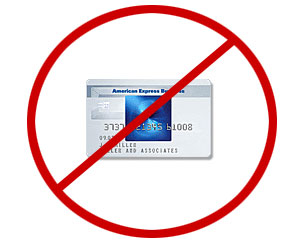 I woke up to one of those calls you rather not get. It was from American Express and it was about my latest bill.

I should explain that I’ve had an Amex card since 1980 and have always had great service, primarily because it’s not a credit card, so it gets paid every month and I like the reporting they provide. There are still lots of places that don’t take the card, but since I use it exclusively for business purposes, its not a problem, and I’ve been super happy with the card.

However, I can’t say I feel the same today. About 8 weeks ago I took Amex up on an offer for a new business card, one that provides a slight rebate. It’s their Amex Business card. Great I figured. The card showed up and I started using it instead of my classic green Amex.

This morning, the voice on the phone from Amex was calling to ask why I hadn’t paid my last invoice. Huh ? I explained that I haven’t yet received an invoice from the new card.

“Ah”, says the voice, “we sent you an invoice 3 weeks ago”. But when the voice told me the address, it was clear why I hadn’t received it.

Amex sent the invoice to the wrong address.

Oddly, they got the card to me to the right address, but somewhere between issuing the card and sending the bill, they screwed up my address.

“Oh”, says the voice, “that’s fine, but until we receive payment, the card will be suspended, and there are some interest charges. Total due on the card with interest is $ 104.00”.

“What?”, says I, “Just send me the bill and I’ll clear the charges, but do remove the interest charge and do remove the suspension, since I haven’t done anything wrong here – you guys sent the bill to the wrong address”.

Long story short: after 30 minutes on the phone and 2 different Amex reps, they refused to reinstate the card until they’d received my $104.00. Even when they looked up my 27 years of payment history, they still were , um, un-moved.

So, because Amex screwed up, I was now being inconvenienced. What amazed me was that there was no-one at American Express who seemed at all concerned about losing a long time customer over their mistake, and over 104 dollar at that.

Needless to say, I’ll not be keeping the new American Express Business card, since this kind of business help I do not need. Nor does any small business person. If you’re thinking about getting one of these cards, think again unless you want to really be blue.