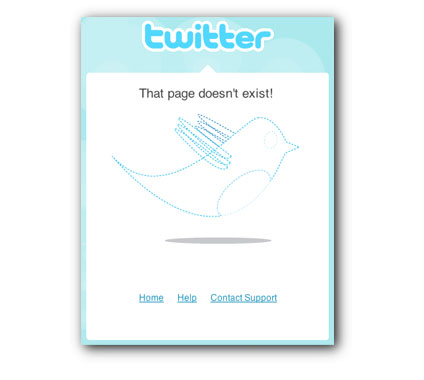 Now that it hardly ever goes sleepy, we’ve got nothing to complain about.

Except today, I registered a new Twitter user for a client, and as usual Twitter sent a lovely email back with info about the account etc.

Problem is the email link to their ‘invite your friends’ page is 404.

Using Twitter is going to change the way you think about staying in touch with friends and family. Did you know you can send and receive Twitter updates via mobile texting or the web? To do that, you’ll want to visit your settings page (and you’ll want to invite some friends).

The New York Times calls Twitter “one of the fastest-growing phenomena on the Internet.” TIME Magazine says, “Twitter is on its way to becoming the next killer app,” and Newsweek noted that “Suddenly, it seems as though all the world’s a-twitter.” What will you think? http://twitter.com

Thanks again for signing up!

In the meantime, I think at least one of the right URLs for the Invite Your Friends is http://twitter.com/invitations/invite_by_email