One of the engineers I used to work with was fond of saying “If it isn’t on fire, it’s a software problem”.

Last night while working diligently away on some wireframes on my MacBook Pro I did a double-take when my power adapter did a little pre-Halloween fireworks show and sent up a small but pungent trail of black smoke. 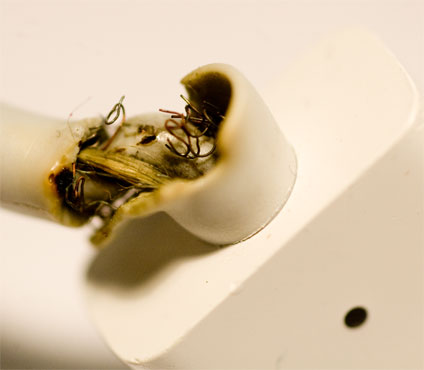 “What’s that smell?” came the chorus from the kitchen. “Well, family, that’s the smell of the clash between form and function”.

All kidding aside, its a good thing I was working at the kitchen counter – not sure what would have happened had I had the computer in my lap, or sitting on bits of paper on the desk (which it often WAS).

I’d read about supposed issues where the power cord connects to the (MagSafe) magnetic connector, but Apple hasn’t issued a recall and there’s no information about this problem on their web site.

I have Apple Care and they didn’t even hesitate to offer to send a new one out. The first question the service rep asked was “Was there anything else damaged when this happened”.

Fortunately I have a 2nd adapter so I’m not without power – not sure what you’d do if you had to wait the 5-7 working days for a new one to arrive.

UPDATE:
Wow!  I got the new replacement power cable via courier today – one day after talking to Apple Care on the phone.  That’s impressive !

One thought on “Then again, if it is on fire…”