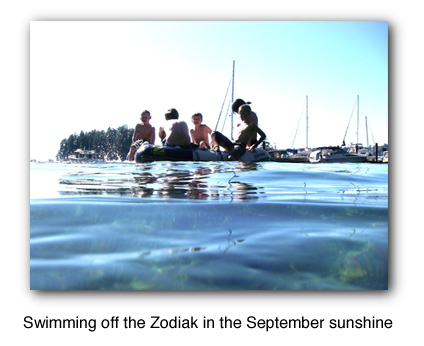 All summer we’ve been planning a combined camping/sailing weekend with some friends of ours who are hard-core campers. They’d heard me talk about Plumper Cove Marine Park where I spent many a weekend this summer on Madsu.

Their family of five walked on the Langdale ferry at Horseshoe Bay, then took the water taxi to Keats Landing, then hiked in to the campground at Plumper Cove. While they were doing that, we sailed to Keats from Horseshoe Bay aboard Madsu.

One of the things our friends asked about were bears.  I told them not to worry, no bears on Keats, so they left their bear proofing gear (mostly food cache ropes/bags) at home.

We had a fabulous Saturday afternoon playing in the water – the cove really warms up in the Sunshine and it’s a treat to be able to spend hours and hours swimming in the sea in September in BC.

Sunday morning as we shared a cup of coffee at our friend’s campsite, the parks people came over to inform us that, in fact, a bear swam over from the mainland and was at that moment cruising the beach behind the campsite.

Much excitement ensued, including packing up all the food and bringing it down to the boat. 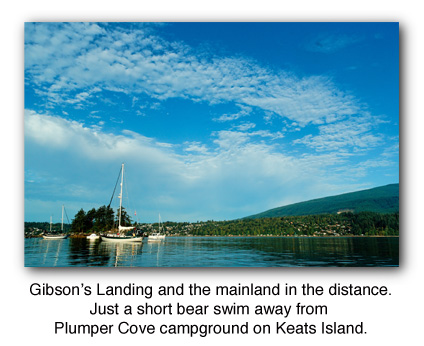 We left around noon, knowing that our friends, now without a speck of food, would be safe from even the hungriest black bear.  And we left Dane and the rest of the parks crew to deal with the interloper.

There was a decent inflow up Collingwood Channel, so we had a spirited broad reach in Howe Sound once we reached the channel, and it held up pretty much to all the way to Hood Point off Bowen Island.

Back on the dock at Horseshoe Bay, I was surprised to get quized about ‘the Keats bear’ by our friends on Sea Dragon.

Apparently there had been lots of VHF radio chatter about the bear, mostly warning boats anchored to keep a watch out if they were rowing to shore.

Through some bizarre alignment of planets, our friends arrived just as I was washing the boat down. They’d taken the water taxi from Keats back to Gibsons Landing, then taken a transit bus to the Landgale Ferry terminal, arriving at Horseshoe Bay just in time to catch up with us.

They fetched their car from the parkade and picked up their gear, and we all went to our respective homes to shower and tell tall tales about the bear we never even saw.

Once settled at home, I went out to dump some garbage in our big green bin, when I got a bit of a surprise.  Since we’re in bear country here on the north shore, we keep our garbage bin inside a shed.  While we were gone, a bear came by and did his/her best to try to rip the door right of the shed in hopes of getting at the bin. 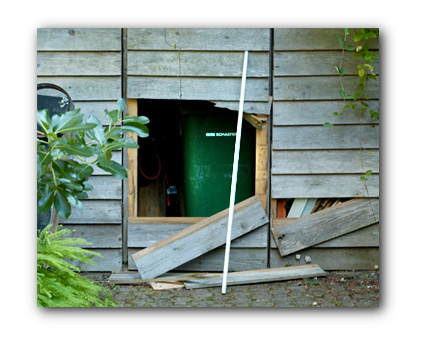 The bear would have been successful too, had we not started using a piece of pipe, New York apartment style, to jam the door closed.  We’ve had the odd bear claw marks on the shed door before, but never a concerted demolition attempt.
Time for me to do a little work shoring up the door.  From the Bear Aware web site:

The rule of thumb is that if it can be dismantled using a crowbar then it is not bear proof.

All this just reminds me of how large our (by that I mean HUMAN) impact is on wildlife.

There is nothing at all unusual, at least for a bear,  about a bear swimming over to Keats Island.  It’s only an event because we’re there, totally unprepared.

Back at my place, the bear should be munching on the wild berries in the ravine behind the house, or even the apples and pears growing in my front yard.  Instead, these natural foods are ignored, in favour of human garbage, a meal residents readily provide, because its too inconvenient for us NOT to.