A friend asked if I could help out by scanning in some of her family’s old slides – the output will be a DVD slide show for her siblings.

Since I’ve got the slide scanner out, I figured I’d do a few of my old negs, and I’m having way too much fun.

On that same trip, I spent tons of time hanging around the working docks at Fisherman’s Wharf.

It was a precursor (I guess) to what I’d end up doing when I finally moved to Vancouver. In any event, loved this boat.

As if the dogs aren’t enough to bring joy to your heart, check out that funky clock on the bulkhead.

All Dogs on Deck 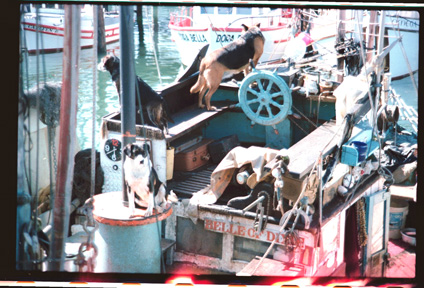 One page later in the negatives binder, and we’re back in Manitoba. Home of the mighty… 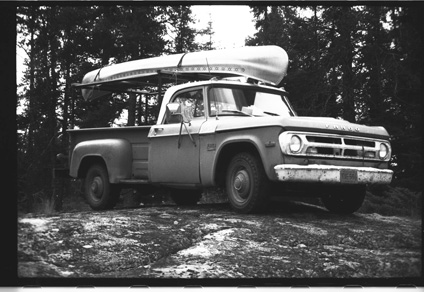 My late-ex-father-in-law Neil (that’s my ex-wife’s late dad if you’re trying to figure it out) gave me this old Fargo truck.

He worked for Trans-Canada Pipelines, and this truck worked the line for years before he bought it, drove it into the ground, then gave it to me. When I drove it the 90 miles from his house to mine, it went through 2 quarts of oil.  I know his neighbours were happy to see it go.

My dad rebuilt the motor and did his best to weld the body back into shape. I drove this thing everywhere and anywhere in Manitoba in the early 80’s, including to my job as the morning show host on CKWG-FM in Winnipeg – “Ouimet in the Morning”.

This is near Falcon Lake, Manitoba.