Vancouver woke up to another fog-bound day. At our elevation in North Vancouver, the fog wasn’t too thick, but as I drove down the 200 metres or so to the freeway, it thickened considerably.

After turning up the Cypress Bowl road it became apparent very quickly that it was blue skies all the way. Just as Snowboard Expert had noted earlier in the week, things up top were the exact opposite of down in the city.

For one, the sun was shining brilliantly. For two – it was a lot warmer up there. In fact, as I rode the lift this morning, I could feel the temperature rising. A classic weather inversion (not really a pineapple express – there’s little or no wind).

By 10 this morning it was plus 6 celsius – and heading to 10 or 11 for the day. Back at my house in North Vancouver, the temperature stayed steady at around freezing most of the morning.

At the top of Black Mountain, I had to unzip my jacket – 3 guys went by me in t-shirts.

I grabbed a shot with my point-n-shoot (I don’t bring my Nikon to the hill) of downtown Vancouver poking its head above the blanket of fog. Interesting aspect of Vancouver you don’t see very often. (click for a full frame version) 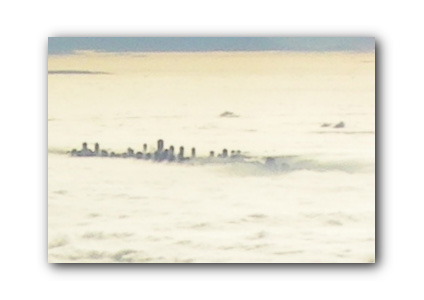 Over in the other direction, Howe Sound is draped in a huge blanket of fog 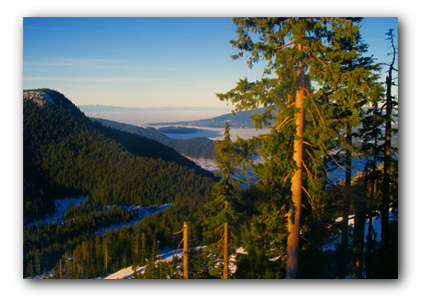 So, if you’re feeling hemmed in by the fog, head UP UP UP to where the sun’s shining.

8 thoughts on “A World Above the Fog”