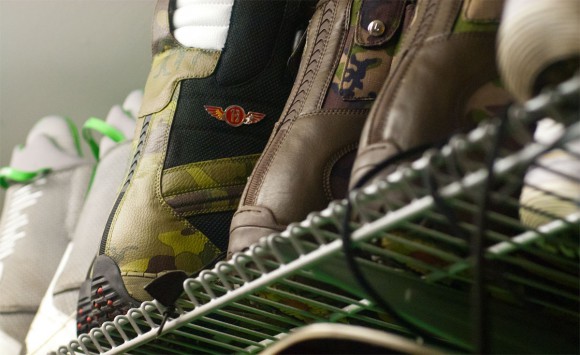 After our annual pilgrimage to Second Wave on Lonsdale, we’re geared up for another year of snowboarding. Truth be told, we’ve been by the store quite a few times in the last month…

As always, we got some great advice & great prices from the guys there – nothing beats having real boarders help you get geared up.  I’m pretty excited about my new Cartel bindings and youngest son is sporting a new pair of Custom bindings to go with his new Clash board.  The new board and bindings are a treat – he usually ends up with his older brother’s hand-me-downs. This year both he and I got some new-to-us hand-me-down boots courtesy oldest son’s (still) growing feet.

Now – about the snow.

After a great start things seem to have gone into stasis – not that I’ve got any big complaints about the blue sky.  But a couple of days of heavy snow on the local mountains would make us all smile – and get those boots off laundry room shelf and strapped to a board where they belong.

Even though I had a lot of work piled up on my desk, I’m pretty sure the time I spent on Cypress added a lot to my productivity.

That.s my story, and I’m sticking to it.

It was foggy so I thought I’d try some vintage looks. 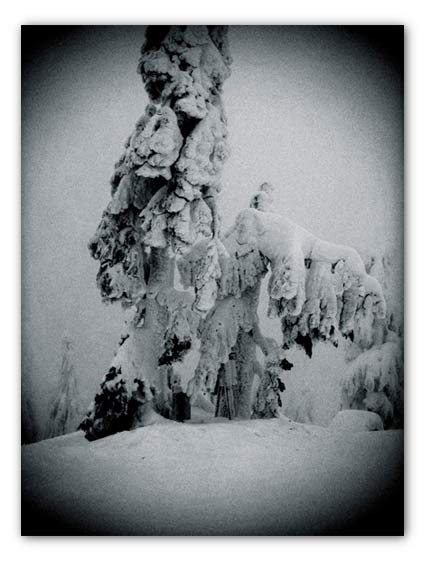 This tree is right at the top of the Lion’s Express chair. We watched with amusement today as a ski instructor spoke to his class of about 8 kids, all gathered round near this tree. 7 of the kids were paying rapt attention, but the 8th was facing the other way, wacking at the snow covered branches with his ski pole. 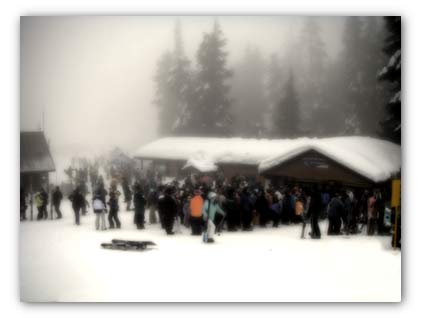 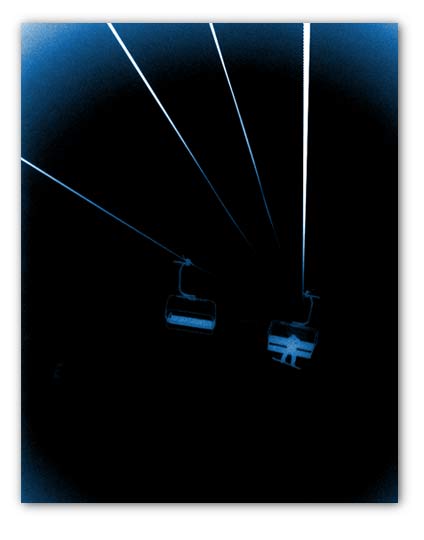 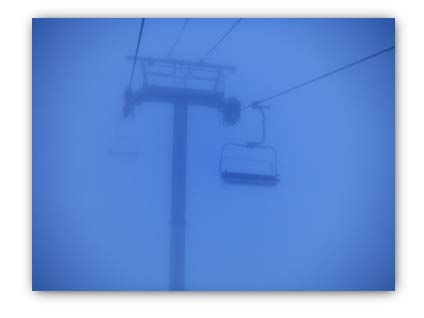 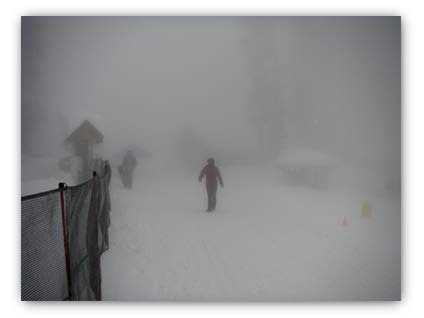 Before the fog and snow, we had some mostly clear skies for first lifts up Cypress this morning.

For more pictures from Cypress Mountain, click any of the photos to go the Cypress set at Flickr. 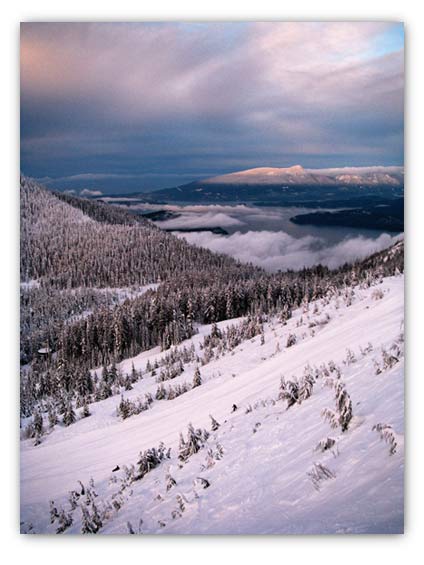 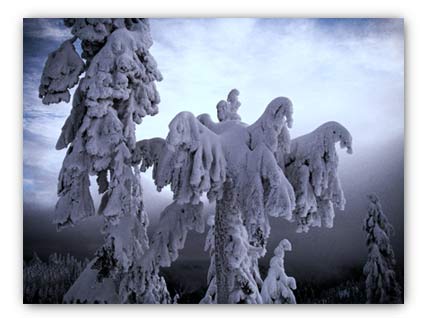 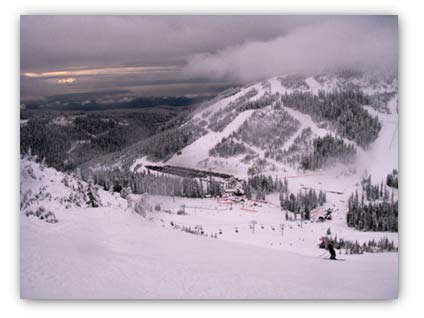 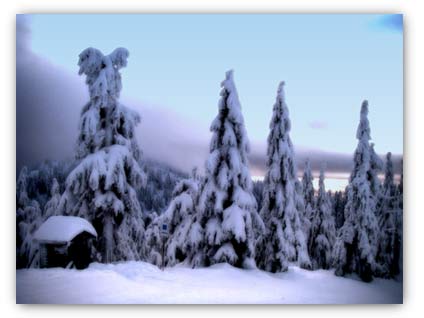 The heavy snowfall the last couple of weeks is the prime topic of discussion on the lifts. Everyone agrees the conditions are the best they’ve been in years. Even though the season got off to a sketchy start, the last 2 weeks has brought fresh snow almost every day.

For more photos, visit my Cypress set at Flickr. 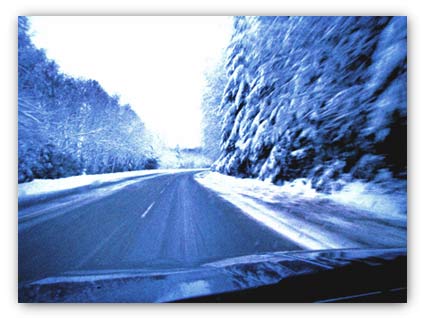 The Cypress Mountain road this morning, well before the first big hairpin. Early this morning they were stopping cars to check for winter tires or chains, but the road seemed to me to be in better condition today than the last few times we were up. 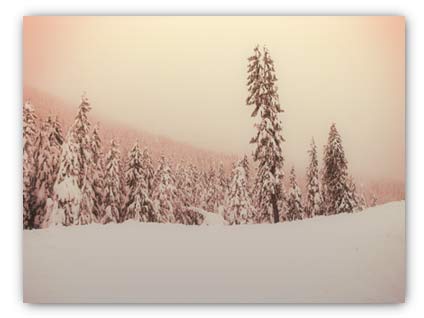 Loads of powder everywhere. We hit the first lift up again today.

Great snow on Cypress Mountain this morning. MB and I managed to be first into a couple of different areas and enjoyed carving through the powder. There’s a ton of snow and the temperature is just above freezing – so it’s pretty comfortable riding except for the heavy fog this morning.

We head up for opening and usually bail by noon when the lift lines start to get too heavy. Nice to live so close.

For more pictures, visit my Cypress set at Flickr. 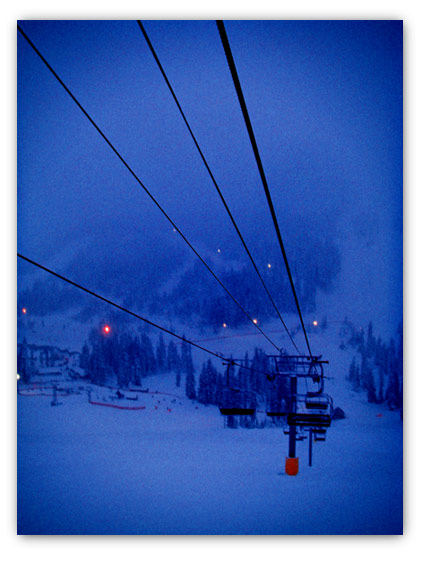 You can see how few people are there at 8:30 in the morning. 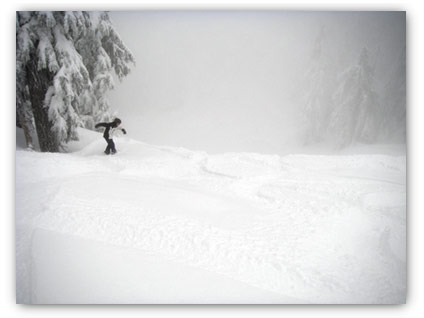 Our 4th run of the morning, there’s still lots of powder to be found if you can see through the fog. 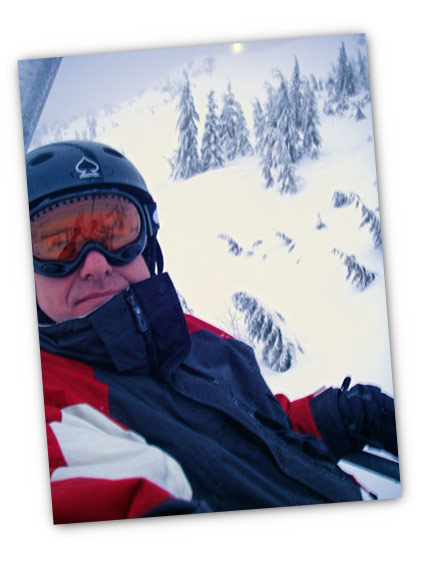 Self, with the Optio W30 (waterproof) which spends the winter in my snowboarding jacket pocket.

There’s a ton of fresh snow on Cypress Mountain, and it’s still snowing. 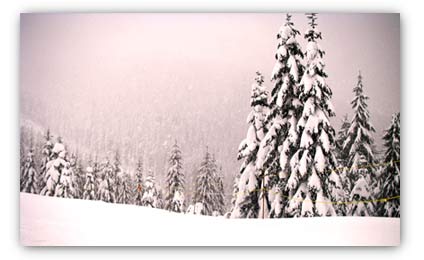 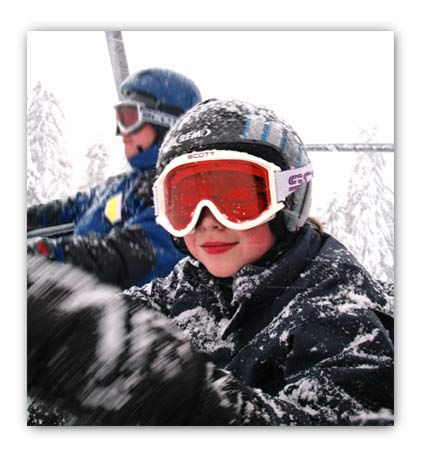 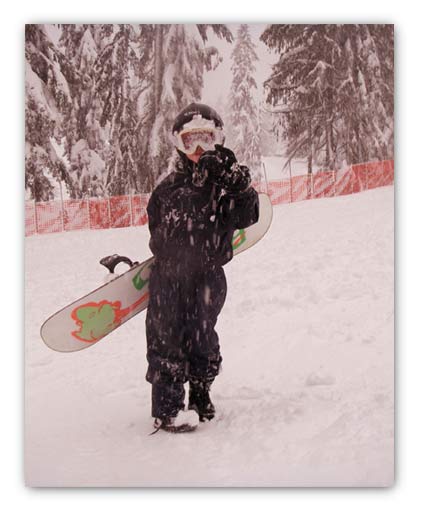 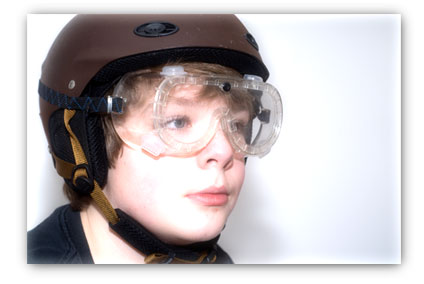 So you just spent a couple hundred bucks on some super cool Oakley goggles, eh?

You just know they’re going to spend more time bouncing around in the trunk getting scratched up than on your head, right ?

Time to put the DIY back in boarding, don’t you think ?

These babies MB is modeling have plenty of air vents, they don’t scratch easily, and if some random wood splinters came flying at you while you’re doing some sick moves on a double-black-diamond – no worries.

I threatened (and anyone who knows me knows that means it’s as good as done) to do a snow dance naked in order to get some white stuff on the local ski hills. 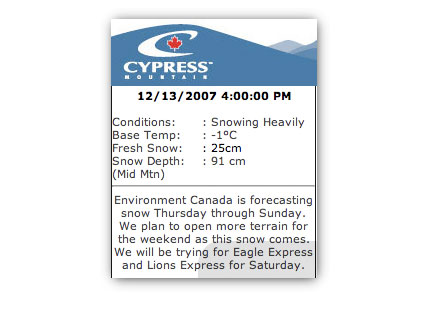 For anyone who was driving around Sunset Gardens earlier in the week and saw a pasty, pudgy, and damn cold blur go by their window – that was me. 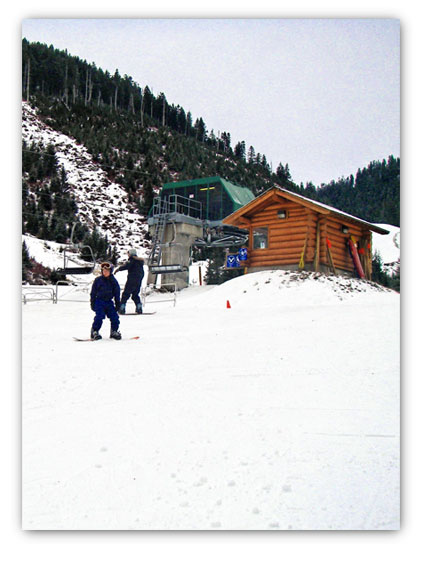 Yikes. GB and I went up to Cypress today, even though we knew the only lift open was the Easy Rider chair which services the bunny hill (Runway).

I was really surprised to see how little snow there is on the mountain. Thanks to last week’s pineapple express, there’s no base left what-so-ever, even though the web site says they have 61 cm at mid-mountain. You can see from this picture at the top of the Easy Rider lift that the terrain above is pretty much rocks.

When you drive up you can see most of the way up the mountain, and there’s very little snow up there – the runs are all showing gravel or grass through the light dusting of snow. I actually think there was more snow in mid-October than there is today.

I gather they’re hauling snow up from the parking lots to keep the bunny hill open, which means it’s festooned with bits of rock and gravel. So if you’re going up, better buy some P-Tex. Better yet, leave your good board at home.

It sure brings home the vagaries of local weather. Last year, most of the mountain was open by mid-November.

I’m disappointed to hear the forecast calls for clearing tomorrow. Damn. We just need a couple of days of snowfall like we had a couple of weeks ago and we should be good to go. 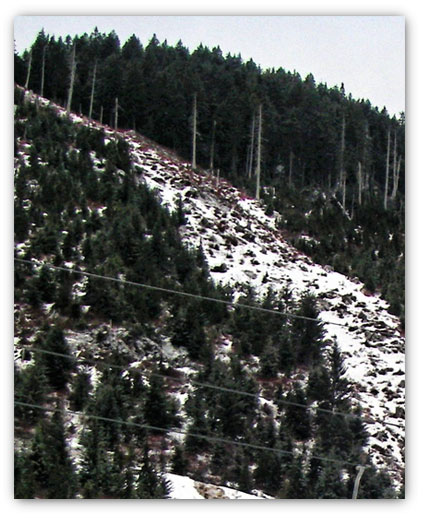 I did a quick stitch job to show the new downhill areas opening up at Cypress this year. You can grab the large version – it’s about 500K and is 2800 pixels wide.

Anyone interested in a high-rez version (10,000 pixels wide) just email me.

It ain’t much, but at least there’s SOME white stuff up there.

This was shot at Cypress sky area today. 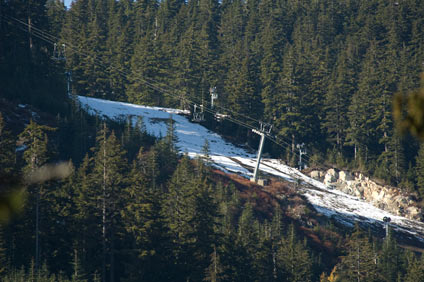 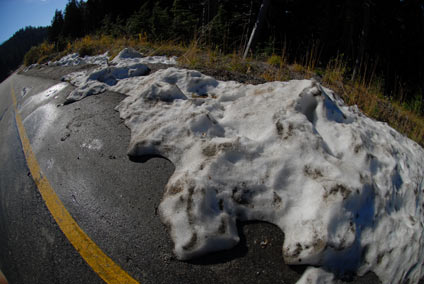 Long way to go before we’ll be riding any of this.

Meanwhile, we bought our family downhill seasons passes this week. What a hassle.

I’ll blog (at length) about this later, but Cypress has really got to do something about their online sales (hopeless) and their customer service.

I can’t believe the hassle involved with just trying to buy a pass.

Its never too early to be thinking about snowboarding. Last year, we had our first ride on Nov 11th, so I’m hoping the local mountains will open up early again this year.

Just back from picking up some amazing deals at Second Wave on Lonsdale. I’ve blogged about them before, and they never fail to impress every time I’m there.

They’ve got a whole rack of last year’s boards at 40% off and some decent boots on sale as well. If you need some fresh gear, get down there soon before the good stuff is gone.

MB picked up a new Burton board and new camo boots – can’t wait to see him riding this bit of kit.