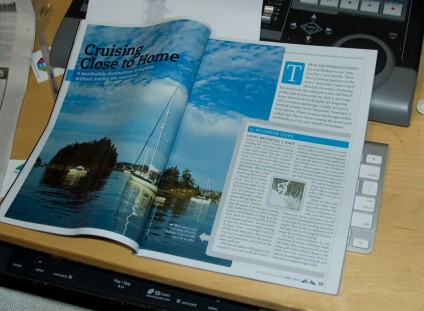 Pacific Yachting magazine emailed me a few weeks ago to see if they could use one of my photos.

They found the picture on Flickr, and contacted me to ask if I’d be willing to let them use it.

The photo was from a September trip to Plumper Cove on Keats Island, and PY used it with of an article by Heather Lochner on nearby cruising destinations.

That weekend, Plumper Cove was particularly spectacular – and we spent a good part of the weekend swimming off the boat and the small beach near the dock. It was one of those magic late summer weekends.  We also ran into old friends Ron and Merideth, who’s boat features prominently centre frame of the shot.

Many thanks to PY designer Arran Yates for selecting the pic.

One thought on “Pacific Yachting Photo”