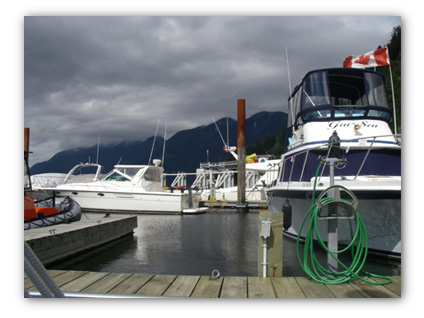 The day was a round-robin of sun, rain, thunder, and little squals.

The patching I’m doing is really fixing old patches that have fallen apart. They aren’t big, maybe half the size of a dime. I can’t quite figure out how they were caused in the first place, a 30 year old boat has a lot of secrets to tell. Probably a dropped wrench or some other heavy tool. One or two of them look like they might have been from the boom, maybe dropping the main without the topping lift (my boom kicker avoids that altogether).

I’m wishing I was heading out instead of sitting here with a putty knife and sandpaper. I’ve got a couple of new jibs coming from Dave and Marcia at North Sails for this type of weather, and I console myself with the thought that it would be a rough ride today with my bagged out #2.

Patches done, I head up to the foredeck to soak up some of the late afternoon sun, the smell of salt water and sounds of the harbour surround me.