It’s a big week around our place as the 2nd major thespian in our house has a show opening this week.

GB is in the cast of That Night Follows Day by Tim Etchels, opening on Wednesday at the PuSh festival in Vancouver.

That Night Follows Day starts out from observations as to how the adult world shapes the world of children. A play for adults, performed by children. With humour and great clarity, the evening explores the economies of parenthood, upbringing, discipline, control and care that define the adolescents’ worlds….The original production (in Flemish) premiered at Brussels’ KunstenFESTIVALdesArts in May 2007. Since then it has toured throughout Europe and beyond at several prestigious festivals.

More on the play, how it originally came together, and reviews of some of the (other) international productions on the author’s web site, timetchles.com

The show runs at PuSh February 4 – 8 at the Roundhouse in Yaletown.

There’s a mini web site/blog for the production here.

You can find out more about Theatre Replacement here.

Tickets for the Vancouver shows through the PuSh festival here

This production also goes to Seattle on March as part of On the Boards – Northwest Series. So if you’re in the US Pacific Northwest you can catch it March 20 & 21 at Behnke Centre for Contemporary Performance in Seattle.

On the Boards also has a blog for the play on their site. 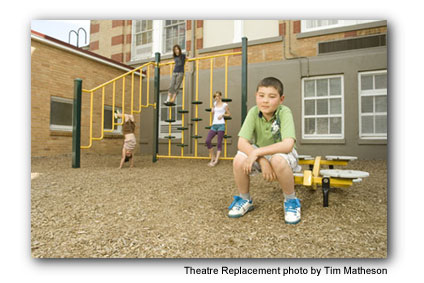