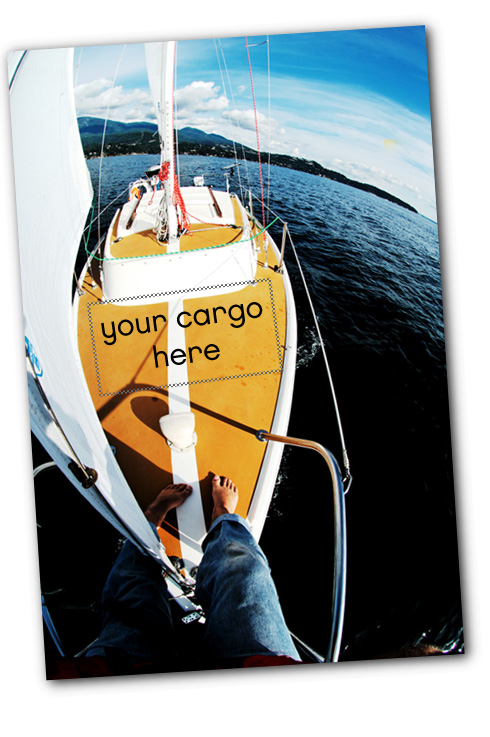 I’ve been pretty smug  about my low carbon recreational footprint. My little sailboat Madsu does have an auxiliary outboard motor, but it’s only on for a short period of time while I motor in and out of the docks at Horseshoe Bay.

The rest of the time, Madsu is under sail.

I do have the need for electricity aboard – power for my running lights, GPS, cabin lights, marine radio and of course my stereo. For that I have small solar charger that keeps my two 12 volt batteries perfectly topped up – in the last 2 years I’ve not once had to plug in to the grid to recharge.

So, when I saw a story in Treehugger about a BC community using sailboats to lower their food carbon footprint, I was hooked on the idea.

It’s reallly the story about a community getting together to do something that’s healthy, rewarding, and dare I say, fun.

Almost 200 people agreed to pay 100.00 dollar each for grain grown by farmers using horses instead of tractors. And to reduce the carbon footprint even more – someone came up with the idea of delivering the crop by sailboat…

After the heritage varieties of wheat were grown, harvested and packaged, the grain shipment was loaded at Kuskanook Harbour on the eastern shore of Kootenay Lake. The sailors took one and half days to sail the length of the lake and into its western arm to a private dock in Nelson. CSA members were out in force to help unload the sailboats and collect their zero carbon grain, including red fife wheat, khorasan wheat, hard spring wheat, spelt and oats. (full story here)

Since I’m out sailing in Howe Sound and the Straight of Georgia a few times a week, I’d gladly carry some cargo aboard.

Who knows, maybe my pal James Glave would like some stuff brought over from the mainland to his Eco-Shed on Bowen Island.

So, if if you’ve got a few bags of grain, baked goods or any other stuff you’d like delivered somewhere on the south Coast – let me know.

Madsu’s out of the water now until spring, but I’d by happy to oblige and help lower your food chain impact.

One thought on “Sailing to Reduce Your Carbon Footprint”