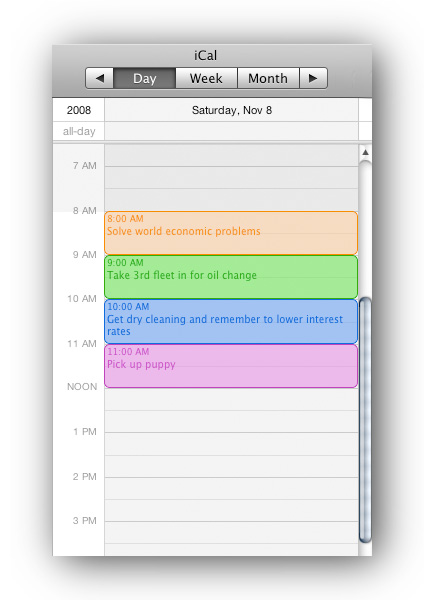 Worried about the global economy ?

Trying to find your way through the uncertainty ?

I have a hot tip for you on where the real growth is, during this, the worst economic crisis in 100 years.

When the sh*t hits the fan, you can do like the late Warren Zevon says and ‘send lawyers, guns, and money’.

You can do what every right thinking bureaucrat does:

During the three-day Summit, the 700 participants of this interdisciplinary event will engage in interactive workshops and sessions to set priorities for the most compelling ideas for improving the state of the world, from groundbreaking areas of research to new and exciting developments and cross-cutting solutions to address the world’s challenges

Since fall is swiftly moving to winter, any good meeting planner knows the best thing is to have your meeting somewhere warm. Dubai may be hot, but Sao Paulo’s hotter…

Officials from the rich and the emerging countries of the G20 will gather in Sao Paulo this weekend to discuss the global financial crisis, but by the time they sit down, a much smaller meeting that has attracted far less attention may already have set the agenda.

Against a background of economic uncertainty and global crisis, the World Economic Forum has announced record engagement from business, government and other leaders for the World Economic Forum Annual Meeting 2009 in January. More than 20 heads of state/government, including G8 countries, and close to 1,000 business leaders have already confirmed their participation, demonstrating the need for governments and business to sit together and focus on an agenda to restore sustained economic growth.

Of course, here in North America, we’re looking forward to the big meeting on November 15th called by George Bush (I dare say when you get a request in Outlook for a meeting featuring BUSH you’re sure to respond).

The beauty of this meeting business is that for every great meeting, there’s also a pre-meeting …

US President George W. Bush announced Thursday that he and president-elect Barack Obama would discuss matters like global economic turmoil and the war in Iraq “early next week.”….The meeting will come just days before world leaders converge on Washington for a November 15 summit to address the causes of and remedies to the international economic meltdown, likely the first in a series.

And of course, by the time the meeting is actually held, we’ve already been told what the attendees are going to say when they get there.

In the entertainment business, we call this ‘phoning it in’. In other words, you don’t really need to be there.

All these meetings make me absolutely giddy with economic spin-off possibilities.

I once worked at a place where we instituted the BlackJack Meeting Rule – no meeting could last more than 21 minutes. It’s one way of keeping meetings to the point and getting to the good stuff, and you can do it on a conference call.

Of course, that would suck for the world economy.

So leaders of the world – keep sending those meeting requests, and let’s see if we can’t juice up the world economy the good old fashioned way – with rubber chicken dinners and endless PowerPoint presentations.