First they set outstanding records for SMS use. Now this:

And all this even before the World Cup.

This new Ipsos Study makes it hard to refute the massive shift in media consumption going on around us.

With that many devices out there and the means of transmitting to those devices available to anyone with an Internet connection, you have to wonder just how many days are left for traditional linear ‘real time’ broadcasters.

The study does give radio some hope though, lots of those polled say they’d like a satellite radio or FM receiver in their MP3 player.

Sitting at my desk, look up and to the right…divine inspiration. 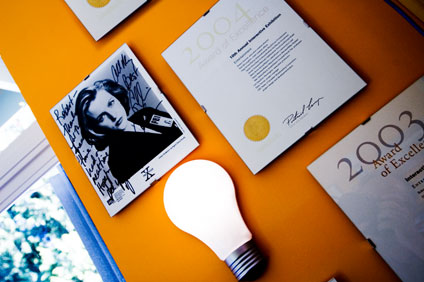 This story about Google and their rejection of high end servers, all the while saving money by making their own servers more energy efficient, is totally fascinating.

This approach reminds me of the work Loc Dao did in our early days of putting CBC programs online. Loc used to always build his own servers, not to save on heat, but mostly because he found the brand names over priced and lacking the kind of goodies he wanted to see in our gear. He was right. His boxes kept us going at half the price of the brand name stuff, until we were forced by the IT folks to use the ‘standard’ stuff.

Clearly you need some smarts and lots of skill to go down this route, but it’s great to get a glimpse of how this can still be done at an enterprise the size of Google.

If you think you’ve got a text-message-jones, you’ve got nothing on the average Brit.

The Register article suggests with all the soccer hoopla, June’s SMS numbers might be even higher.

Here in Canada, with telco’s collecting a dime on every message, that would translate into 33 million dollars in revenue.

One of our clients has launched a Muffin Contest.

If you’re good in the kitchen and you’ve got a fabulous muffin recipe, you could make your muffin famous.

Capers Community Markets is looking for a signature muffin to be part of their new store on Cambie Street.

And there are some great prizes for the winners.

Personally, I like a hearty muffin first thing in the morning. When I was working an office job Eileen used to make these ‘meal in a muffin’ muffins that would keep me going all day.  I also like to decapitate them, eat the bottom first, then savour the head.  But that’s just me.

Here’s a sure-fire way of killing off the CBC.

The recent suggestion that CBC TV do both those things is the quickest way to kill the Canadian Broadcasting Corporation. And if CBC Radio thinks this isn’t about them, they’re dead wrong.

If you say “CBC” to most Canadians, their first reaction will be “Hockey Night in Canada”. There’s just no contest – that’s what the network is known for, and that’s what brings in the big numbers, consistently year by year. 4.7 million people watched the last Stanley Cup game on TV.

Hockey Night in Canada also brings in the big bucks. Now, CBC TV doesn’t survive on advertising alone, it’s only part of its budget – the rest comes from the government. And if anyone seriously thinks the government is going to toss the CBC an additional 400 million dollars to make up for lost ad revenue, they’re definitely inhaling.

It’s totally naïve to think that somehow we can create a pristine Public Broadcaster that doesn’t carry ads and doesn’t carry mainstream popular programming, like sports.

This isn’t the 40’s. Viewers have options, hundreds of channels. No one, and I mean no one, is going to watch programming that’s ‘good for them’ because it’s being created by their public broadcaster.

Whether you like sports or not, CBC is renowned for its excellent sports coverage. Hockey Night in Canada attracts the very best live television production crews on the planet.

The irony is that killing advertising on CBC TV equates to killing sports – they won’t be able to afford the rights to any sports without the ad revenue.

And here’s the dilemma for CBC Radio, a network that’s been advertising free for decades, and loves to lord it over their TV counterparts.

The survival of CBC as a whole is entirely dependent upon CBC Television. CBC TV is a mammoth part of the organization, and CBC Radio is totally dependent upon the mammoth infrastructure that surrounds it.

CBC Radio is a relatively small media player in this new converged world, but it leverages its association with the larger TV network to its advantage in many business critical ways:

So while The Friends of Public Broadcasting are busy lambasting CBC TV about bumping The National once a week (in some times zones) for a new US TV show, they should be focusing on the real threat to CBC – relevance in a competitive marketplace.

Of course, CBC doesn’t help itself much. The timing of the announcement regarding the bump to the The National is a classic communications blunder. And bragging in the Toronto Star about how they’ve got new media all figured out doesn’t help their credibility any. Particularly when they whine about never having enough money but in the same breath mention they have 160 staff working on their web site, and take the time to ridicule one of their own, a former Vice President who actually pushed new media to the fore at CBC.

Is CBC TV having trouble? Sure. Every ‘traditional’ media organization in the world is having trouble in this fast paced, technology-volatile world. Have they got new media figured out? Not by a long shot.

But the biggest threat CBC faces by far is the idea of axing one of its main sources of revenue, and killing its most popular programming. 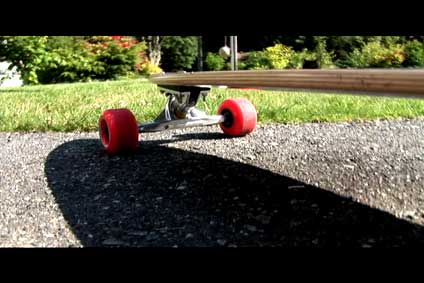 Ok. This is totally not important.

It pisses me off.

I was out buying AC extension cords today.  I couldn’t believe the range in prices for the EXACT same 16 gauge electrical cord.  I went to three different stores on the North Shore – the highest was over 18 dollars (Rona) to 12 dollars (Home Depot) and finally, 9 dollars at Sears

That’s some price range for a few metres of 3 strand wire. You can guess where I won’t be shopping anytime soon. 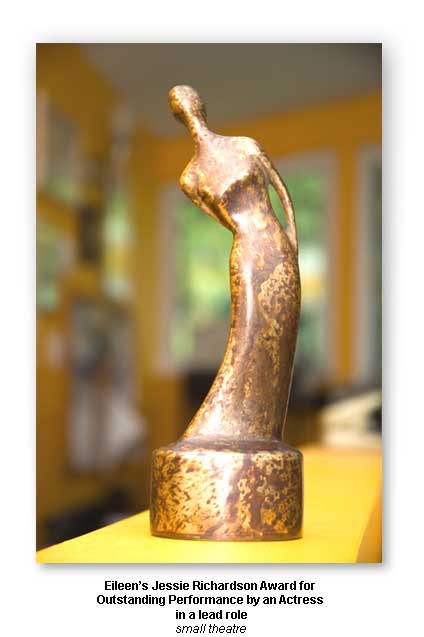 How I Learned to Drive, the play we produced last year at Performance Works on Granville Island picked up two Jessie Richardson awards last night in Vancouver.  Both in the ‘small theatre’ category.

Four years ago when Eileen read Paula Vogel’s Pulitzer Prize winning play How I Learned to Drive, she couldn’t understand why it had never been done in Vancouver. Our answer was, “lets do it” and so began a wonderful experience with some of the city’s best actors, director, lighting designers and stage managers.

It’s a real tribute to the acting community in Vancouver that this kind of self-funded theatre can still be done, and done to critical acclaim.

New forms of broadcast, and new business models for these new forms, are showing up faster and faster. Steve Rubel spotted this high def show out of Argentina…

Roland is the coolest co-presenter ever. As we were introducing ourselves at our session on EverythingCasting, he had his phone on video mode and zapping it up via Shozu. Check this out.

My niece is here from North Carolina and she’s sporting an iPod supplied by her university. She’s in a dance program and her and other ‘arty’ types get the iPods free for the year as they integrate music with their art.

There is absolutely no connection between that bit of info and this next bit. Or is there ?

This is a very sad state of affairs. And just when I’m thinking things are really going to crap, I see this story…

Clearly, things are well past the ‘gone too far’ stage. 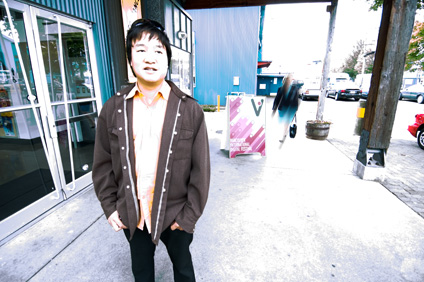 Another recent escapee from the CBC, Loc Dao, president of Randomlink Interactive Inc. outside the partnering forum at VidFest 2006 in Vancouver.

Roland Tanglao and I did a session on “EverythingCasting” (with thanks to Eric Rice for the title) at VidFest in Vancouver today.

The session was packed and thanks to everyone who came.  You can get a PDF version of our slides here.

You’ll find a list of resources related to podcasting and videocasting at del.icio.us/tag/everythingcasting

I’m so impressed with these guys.

I’ve bought stuff from Vistek.ca a few times. Although I always prefer to buy from local suppliers, these guys have great prices and quick service.

10 days ago I bought a new camera from them.  They pay the shipping and it showed up a few days later as promised.  Fantastic.

This morning, as I was looking for something online, I discovered that they just put the very same camera on sale, reducing it by 500 dollars.

Wow, that’s a big difference.  I figured I’d get on the phone and see if I could get them to adjust my price, even though the deals been done.

Unlike a lot of online sales operations I’ve encountered, I was able to reach a sales person right away.  I explained the situation, and without even a pause, he said he was pretty sure he could offer the savings, but had to check with his boss.  A few minutes later, I got an email confirming that indeed they would give me the reduced price, and credit my account.  Just like that.

It doesn’t get much better than that, and they’ve got my business locked in, that’s for sure.

Cruising the neighbourhood after dinner. 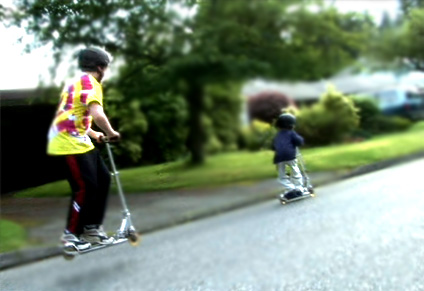 Grabbing frames out of the high def video camera to see how they turn out as stills. A little PS tweaking and here’s the Ozzinator… 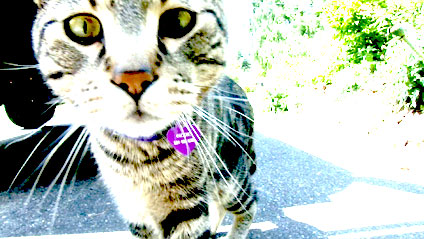