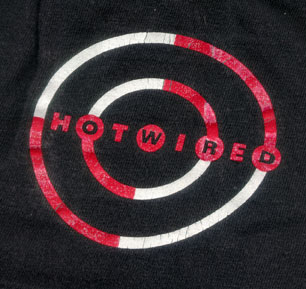 There’s a reason we get all this rain in British Columbia.

We’ve got flowers to feed. 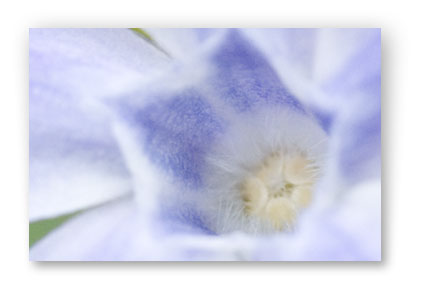 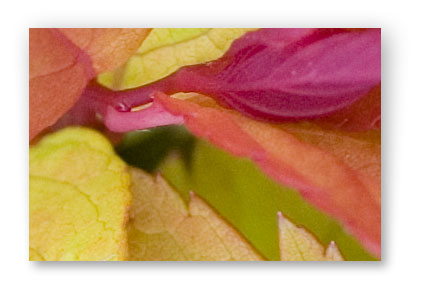 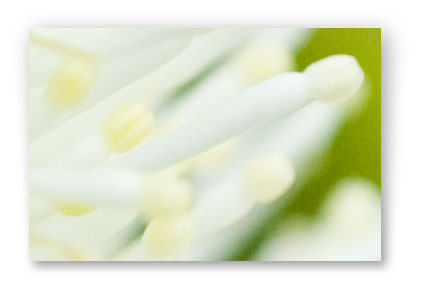 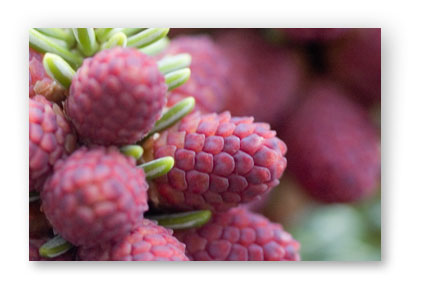 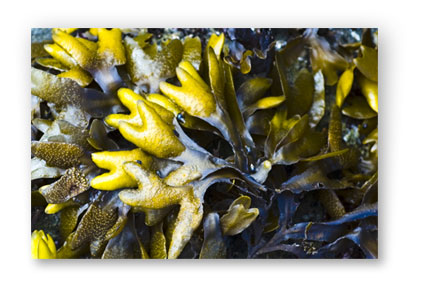 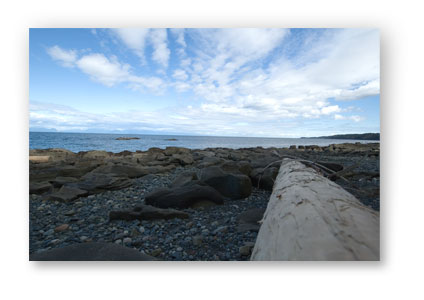 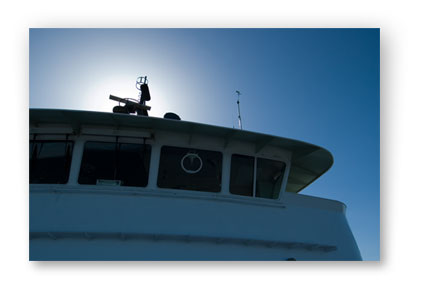 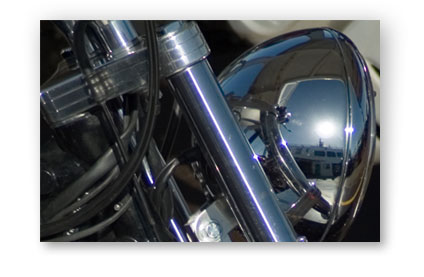 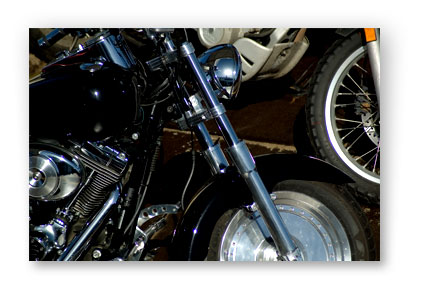 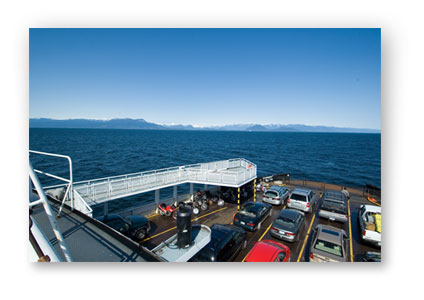 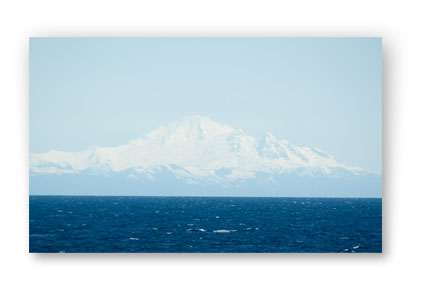 The BBC had not one but two major gas stories today.

No wonder the world always turns to the BBC.

I’m doing some work on the blog and you may find some odd behavior.
Progress always has a price.
It should be cleared up in the next day or so.

Done. Loc’s a star for making it all work.

I like the look of dandelions but I’m not too fussy about what they do to my lawn.

And since our lawn is a chemical free zone, the dandelions love it.

After seeing a water powered weeding tool at Lee Valley Tools, but choking on the price, I thought I’d try a little something. 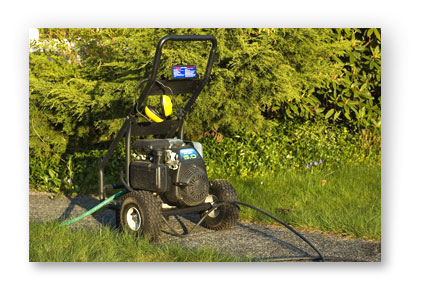 It’s a bit like using a canoe to shovel gravel, but what the heck. I fired up the power washer, and after a little experimentation I found that if I planted the wand (pun intended) right at the heart of the dandelion, then rotated the handle in a circular motion (while keeping the wand tip planted)… 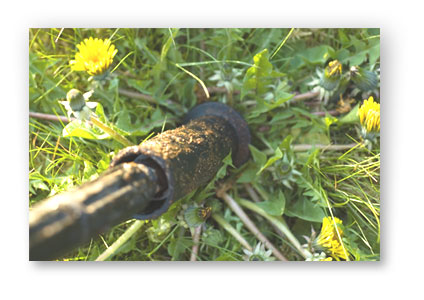 I could pretty much float that weed right out of its steely grip ! 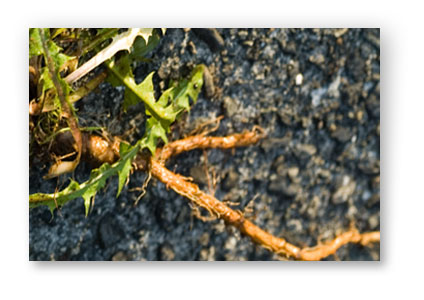 You will have to actually bend over to pull out the weed, but other than that, it’s virtually work free.

The irony of course is that I’m burning gasoline to fuel the power washer, so it’s not exactly environmentally perfect.

Maybe I’ll have to spring the dough for that Lee Valley tool after all…?  No way.

Walking around the neighbourhood yesterday I was reminded why it’s so great living here. 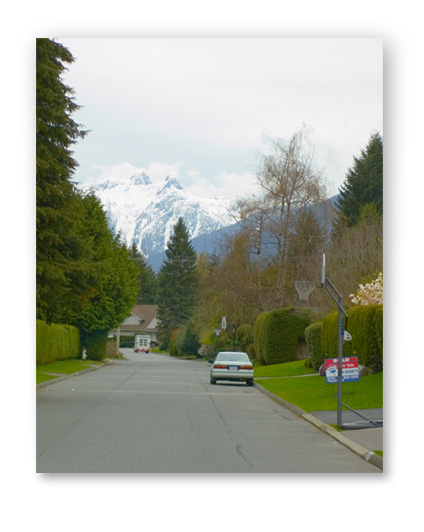 Even on a dull grey day, catching a glimpse of the North Shore mountains makes those super high house prices seem, well, still super high, but at least you’ve got something to look out at.

Canada’s own psychic Zimmer Twins are nominated for a Webby Award!

The Webby’s are the web’s most prestigious awards, also known as the Oscar’s of the Internet.

The Twins have been stars of the web for years now, and more recently on Teletoon TV.

It would only be right for them to win a Webby: they’re fun, funny and Canadian (well, they’re from Toronto, but that’s ok).

Check out their web site and make some movies with Edgar, Eva and their cat 13, and you’ll quickly see why they should win.

The Webby’s have a juried award and a People’s Voice Award, and that’s where you can help. Every vote in the People’s Voice puts them one step closer to the red carpet.

Comon’ Canada ! Register here and vote for the Zimmer Twins now ! They’re in the youth category.

You only have until May 5th to vote.

Required Canadian Tug at Heartstrings:
Believe me, these awards are tough to win, and its a huge deal just to be nominated. There are hardly ever Canadians in the winners circle, so do what you can to support these guys.

I’m sure it had nothing to do with my post over the weekend, but Cypress Mountain is extending its riding season.  Yahoo.

Both Cypress Mountain and Grouse Mountain are scheduled to close for the season on Monday the 17th – no word on the Mount Seymour web site.

Ironic, considering they’re getting a huge dump of snow, enough to close the Mount Seymour Road today – and thats on top of a base of 4 metres.  Yummy. 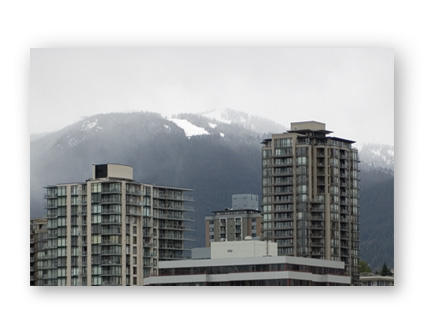 Going through some old files for a project, I came across this screen grab from 1997.

It seems like a lifetime ago that IE was the ‘new kid’ on the browser block. 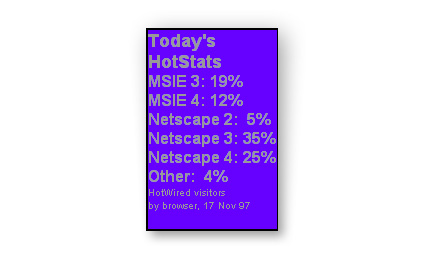 By the way, this ‘hot stats’ box was on the front page of Wired Magazine’s online site,

I love how even the most benign objects can look scarey in close up. 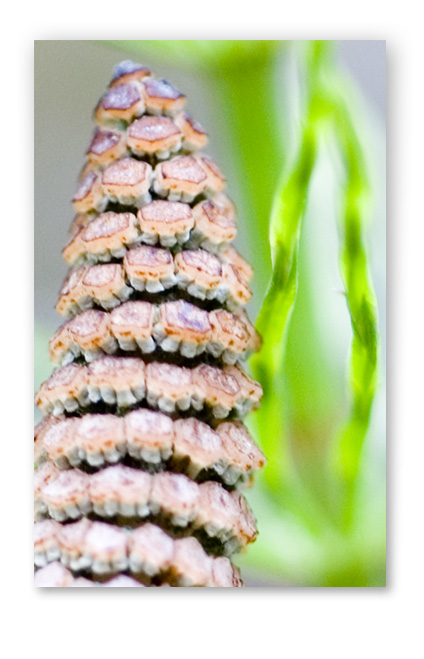 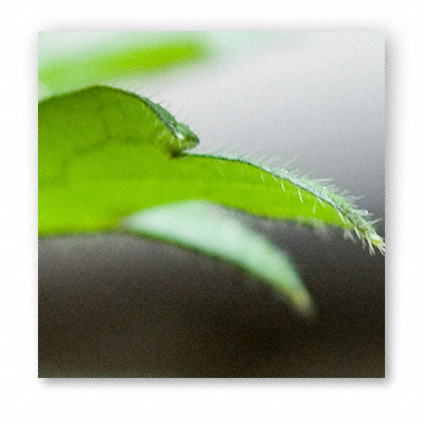 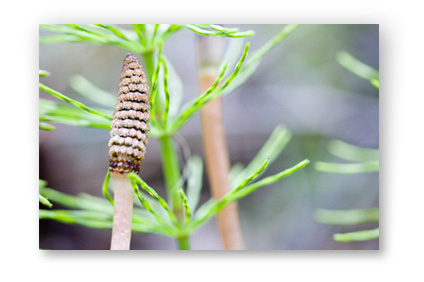 Author Nathan Sellyn sent me an invitation to his ‘launch’ party.  Here’s what his email said:

Taking him at his word, I’m extending the invitation out to you. If you’re in the Vancouver area, you should come out.  You’ll get to meet a new young author and years later will be able to tell everyone you “knew him when…”.

Click the invite for a printable PDF version.  See you there. 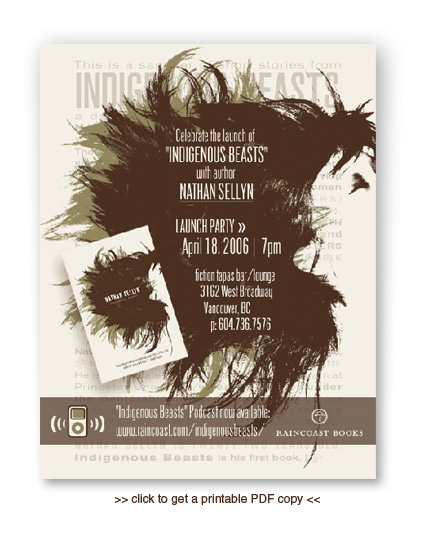 Here in Vancouver CKNW continues to dominate the market. Here’s the skinny from Broadcaster Magazine:

To put some perspective on CKNW’s domination here, their 14.7 share of hours tuned is more than CBC Radio One and Two combined, and almost twice CBC Radio One’s hours tuned.

The number of new and handy tools available online continues to grow.

Like most people, 90% of the work I do is on a computer connected to the Internet, and any tools that can be used anywhere/anytime are good to have.

cl1p.net calls itself the Internet clipboard. You can copy and past between computers – or to distribute the same info to a bunch of people. For an example of how it works, I posted a message using cl1p.net here: cl1p.net/bigsnit

Along with whatever you cut/paste into cl1p.net, you can also upload files up to 2 meg.  I can see lots of uses for this, particularly when I’m away from my desk.  Let’s hope it sticks around.

By the way – there’s a Toronto based URL – clip.net  that’s going to start getting an awful lot of unexpected traffic !

Back when we created CBC Radio 3’s New Music Canada (in 2000) one of the key aspects was that people posting their songs to the web site would stand a good chance of getting picked up by various CBC radio programs. From the day the site launched, this was true – in fact we spun the web site into a national radio show on Saturday nights and gave local show producers access to the database so they could find local bands to play in their cities (some of them did, some didn’t, but that’s another story). That same material fuels one of Canada’s top podcasts as well as CBC Radio 3’s satellite music channel on Sirius.

I’m seeing a lot of parallels now in the blogging world – which makes perfect sense. Forward thinking publishers are finally realizing that there’s a lot of expertise in those blogs, where people are largely motivated by a deep desire to share their knowledge. Just like the record companies that started cruising the New Music Canada web site for new talent, publishers are now looking at scanning the best of the blogging world for new articles.

Here in Vancouver, we’ve got a couple of different approaches to this. Michael Tippett’s Now Public and Paul Sullivan’s Orato.com

They have different models, but in both cases, the underlying principles are the same. This represents a huge shift in how media content is generated.

The tools for the general public remain a bit confusing, RSS should be a staple for any Internet user but still has a long way to go. But we’re getting there – and every little step forward makes it impossible to go back. And that is exciting both for content creators and consumers.

Wouldn’t it be nice if Canadian carriers felt the need to offer free broadband as a way of getting phone subscribers? The BBC says it’s happening in the UK.

In an on-going quest to find something useful in all that spam, I figured if nothing else, spam provides a lot of data points. A while I go I used those data point to create a spam song.

Listening to people complain about spam prompted this latest project.

I took over 8,000 spam emails I’ve recieved since the beginning of the year. I sorted them into broad categories. The result: 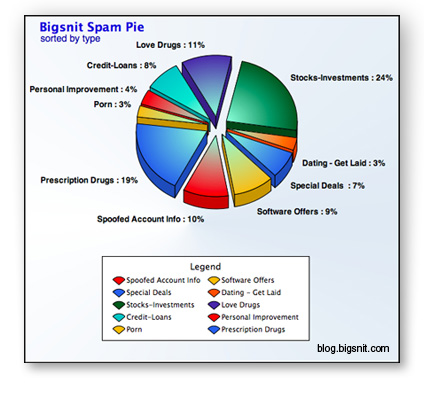 As inexact as all get-out, it does give you a pretty good idea of what spammers are pushing.

If you’re wondering about the categories, here’s a rough guide.

Why I’ll put Windows XP on my MacBook Pro

I’ve never subscribed to the ‘this OS is better than that OS’ battle. For me, a tool is a tool, and some are better for doing some things than others. Deciding to buy a Mac after being life-long Windows PC owner was the result of need; I simply can’t make enhanced podcasts on a PC and I need to be able to see web sites on as many platforms and browsers as possible. No zealotry at play, period. My MacBook Pro lives quite happily with my Windows PC’s, I’m now using both quite happily.

Since Apple has officially sanctioned the ability to load XP on new Intel Macs using BootCamp, people are coming out of the woodwork with bizarre arguments about why this is a horrible idea. Seems like a useless argument.

For me, it’s a total win-win. I’ve got a powerful Mac laptop that I use on the road and at client meetings. When I’m giving a workshop I now can highlight both Windows and Mac software on the same machine. Handy.

Dude. Get to Australia right now

Podcast on the auction block

Doug Kaye is looking for a sponsor for the podcast edition of Tech Nation, featuring Dr. Moira Gunn. Much to Doug’s wife’s horror, his blog headline for this new endeavor is Pimping Moira. It’ll be interesting to see how the auction goes, they’re starting with a reserve of 12K USD.

Our pear trees are starting to bloom. 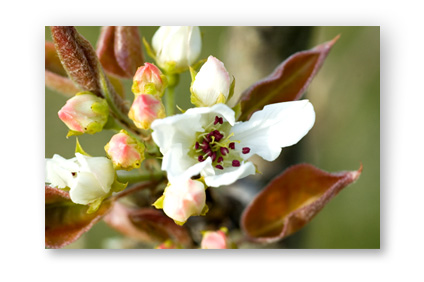 Meanwhile, from his safe vantage point up in the office, Ozzie’s keeping close tabs on the bees visiting the pears. 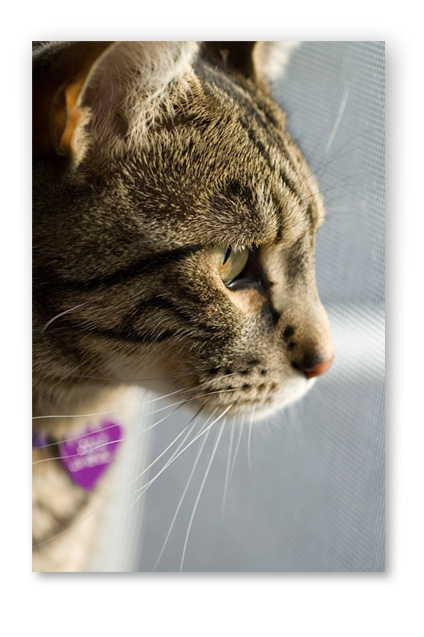