My little sailboat Madsu remains tucked away under a tarp next to my house for the winter.

This 198 foot beauty is called Méduse, and she was (and may still be) owned by Paul Allen, one of the founders of Microsoft and a fairly regular visitor to these parts.  She was hanging out at Lonsdale Quay when I was there on Monday (Feb 1).

I wonder if she’s here is here for the Olympics ?

That’s a lot of hull to keep sparkly clean.

UPDATE: A friend on Twitter tells me she’s now owned by the Washington family – they’re the people who own Cates tugs of North Vancouver – and the owners of these docks…so that makes some sense. 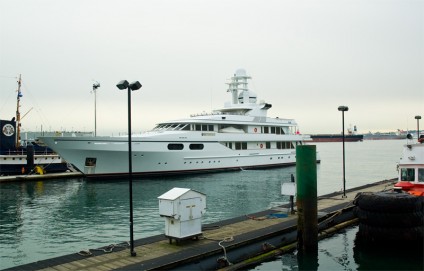 It’s a reminder of how quickly things can change when the core business in based on bytes, not bricks.

In the case of Flickr, it creates a very interesting situation – we’ll see how it plays out. The issue here isn’t money or size, it’s credibility and image.

Flickr is a photo sharing site, and a darling of the Web 2.0 crowd. There are other, more popular photo sharing sites, but among other things, Flickr provides an open API . And that means people have found lots of creative ways to plug into the Flickr functionality in ways that suits them best. Flickr’s approach has always been making it easy for users to share their photos, and to plug into that sharing framework in any way they want.

Personally, I love Flickr. It’s very good at what it does, it’s free, it was originally built in Vancouver, and it has kept true to its community roots.

A few years ago, Flickr was purchased by Yahoo . If the Microsoft deal goes through, Flickr will be a Microsoft property.

And if there’s one thing about those web 2.0 people – they almost all detest Microsoft,. You could write volumes about why they do.

So what happens now ? Will Flickr fans shun it ? They certainly didn’t when it was purchased by Yahoo – a company that also has its detractors.

Ultimately, the community (one that has uploaded 2 billion photos to Flickr) is in the driver’s seat.

Flickr and other community sites aren’t ‘the town square’.

They’re the people in the square – and they’re free to go where they please.

Update: Wired.com has an article on rumblings in the Flickr community about the possibility of the MS acquisition.  Laughing Squid also covers.