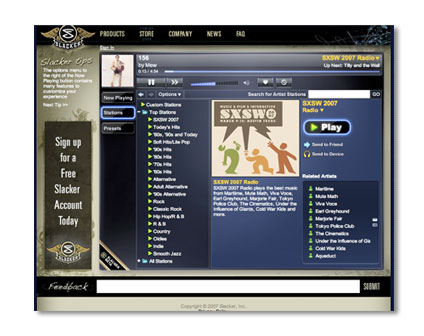 What launched today is a web based music site called Slacker.

But according to TechCrunch its some kind of uber-music-hardware service.

…they have PC based, iTunes-like software coming that will organize the music on your computer as well as play the same radio stations as the web based version… also has hardware ambitions….[and] a satellite car kit in the works that will ensure that wherever you are, Slacker is with you.

Whether this works out or not for Slacker, the idea makes perfect sense.

Right now there’s too much separation between online audio and our devices. iTunes is the closest we’ve got and even if you’re Mac-evolved from pod-to-desktop, it’s annoying to say the least and hardly tuned to what users really need.