A couple of days ago I was crooning about how much I like the PSP as a platform for, well, everything. The PSP just got released in Europe, and according to this story from BBC, it is the fastest selling game console EVER in the UK.

TV on your phone.

Let me confess. I don’t actually watch much TV. My consumption is usually prompted by a) an inability to sleep or b) some big news story. I actually like the medium, I just rarely find anything on that I want to watch. Despite my lack of excitement, putting media on devices people use and carry with them is just plain smart. Getting video clips on your phone has already rolled out in Canada, but the real play involves a lot more than what we’re getting now. Access to realtime broadcasts and multiple channels is going to put a huge amount of content into play, opening up some interesting niche programming opportunities. 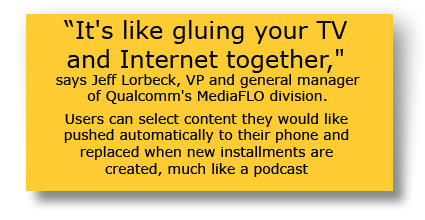 The word Mr. Lorbeck is looking for is mashup. This article in e-week is a bit of a promo-fest, but you get the idea of where things are going. Here in Canada, there are some clever companies developing interesting phone/tv mashups, including Exponentia here in Vancouver and Quickplay in Toronto (Mark Hyland, CBC’s former head of Broadband & Digital Services left last spring to join the latter). Even though I’m not likely to use my phone to watch Survivor, I probably would to find out what’s going on when there’s a story breaking. That’s because like most of us, I expect to get the information I want, when I want it, in the form I want it, on the device most handy to me.

This does leads me to wonder just how soon we’ll see the rise of the retro-cell.
“Hey Look what I got. It’s soooo retro. It’s a cell phone, and all it does is, um, PHONE. ”
“Awesome dude. But how does it work, and why would anyone want it ?”

Mashups and Izations…
Success isn’t about pushing TV content to the phones. Success will be some mashup; a sweet-spot that includes new screen technologies, and two important izations. They are: the iPodization of everything, and the googlization of information. Whoever comes up with a phone with a usable interface, that can scour databases for the latest video clips, and then give them to me on a screen I can actually see on the bus (or the street) on the way to work – well, now we’re talking.

Which takes me back to the PSP. Sure it’s a game platform. But check the racks at your local Future Shop. You’ll find more movies for the PSP than you’ll find games. And that’s not just because it’s faster to port a movie to the PSP than it is to port a game (which it is). It’s also because it’s a great screen on a portable device. In that same Future Shop you’ll find a wasteland of portable DVD players going for way cheaper than the PSP; you’ll find them in the bargain bin. That’s because Sony has found the sweet spot, a mashup of DVDization (the movies) and iPodization (portability).